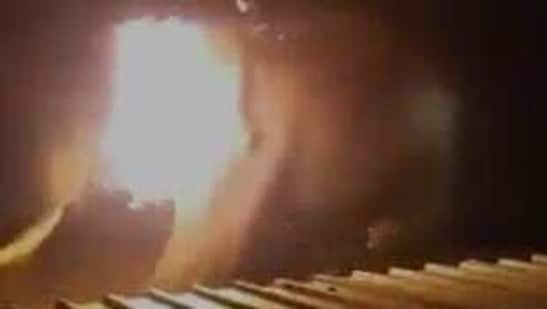 Two males have been arrested on Friday in reference to torching the ears of a 40-year-old wild elephant in Tamil Nadu’s Nilgiris district. The elephant succumbed to his accidents on January 19.

Prasath, 36, and Raymond, 28, have been booked for offences underneath the Wildlife (Protection) Act, 1972.

The horrific video of the incident has emerged displaying the miscreants throwing a flaming fabric wrapped towards wooden on the jumbo. The animal could be seen with flames over his head and is operating round trumpeting and in ache.

“This is heartbreaking and cruel. The action we take against them should serve as a deterrent,” mentioned Nilgiris district collector J Innocent Divya.

Officials have additionally sealed a homestay that the duo was operating.

Forest officers have been following the elephant since November. “It (the elephant) had an injury on its back and it was roaming around in human habitation and was not returning to the forest,” mentioned LCS Srikanth, deputy director of Mudumalai Tiger Reserve in Masinagudi.

The division had tranquilised the pachyderm in December. “But it was still weak and moving around very slowly,” mentioned Srikanth.

Forest officers observed severe accidents to its ear within the first week of January. On the 19th morning they tranquilised the elephant once more to take it for remedy to a close-by camp. “It died when we were nearing the camp,” Srikanth mentioned.

The autopsy is full and the report is awaited, the officers mentioned.

Animal rights activists mentioned that this cruelty was a part of the bigger drawback of man-animal battle.

“This is a criminal act and punishments under the Wildlife (Protection) Act aren’t severe. The court should take suo-motu cognisance of this; go out of the law books and pronounce stringent imprisonment so it serves as an example,” he added.